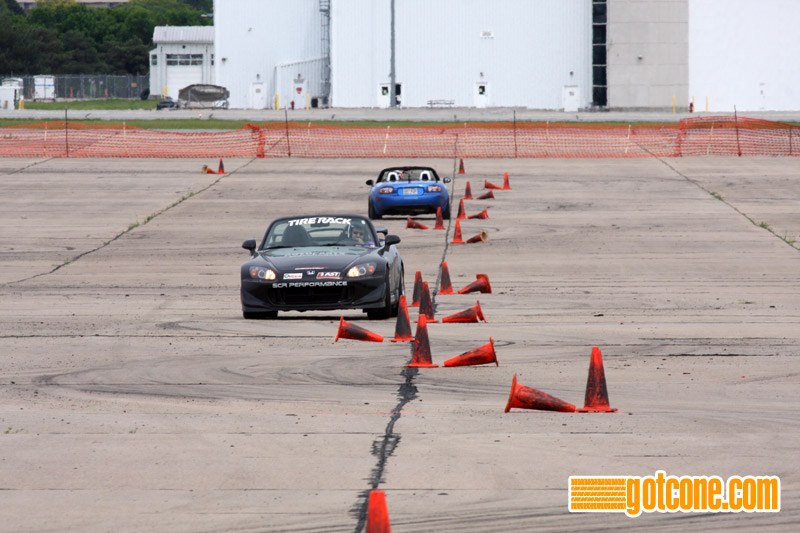 Setting tire pressures is the easiest and most reliable way to change the behavior of a car. It is also the only method that can be done at the track to any vehicle. Surprisingly large improvements can be made even to a 100% stock car using nothing more than a bit of compressed air.

Tuning tire pressures is considered a very basic skill in autocross. But have you really considered how it works? Do you have a strategy for finding the perfect tire pressures? Absolutely everything else on the car depends on tires that are performing their best, so over the next couple posts, we're going to discuss a few techniques for perfecting your tire pressures.

The neat thing about tires is that they are really simple devices. Well, at least, they’re easy to tune! Tire technology is actually about as much “voodoo black magic” as you can find on a vehicle. But for better or worse, all the magic happens at the factory, so other than picking the best tire, we don’t really need to worry about it too much. For our purposes, tuning tire pressures requires nothing more than an air gauge and a piece of chalk.

The most important thing about tire tuning is finding the “sweet spot.” Every tire seems to have an optimal tire pressure that provides the most traction. Finding this sweet spot is massively important, no matter what kind of car you are driving. If you haven’t found the sweet spot for your tires, you’ll be at a permanent handicap. No amount of alignment, fancy shocks, or spring changes will fix the fact that you’re giving up traction due to a sub-optimal contact patch. So it is important that you go through the exercises here as the starting point for sorting any car, in any class.

The optimal pressure for a tire can vary widely depending on the construction characteristics of the tire as well as the car’s weight, suspension, and alignment. A heavy Street-class car with poor alignment on a tire with soft sidewalls might require more than 55psi, while some of the D-Modified Lotus 7 clones run less than 15psi in their Avon slicks.

The easiest way to find a starting point is to find out what other people are running. Obviously, the closer someone’s setup is to yours, the more useful their advice will be. If I'm starting with a new setup and can’t find anything close, I’ll usually start at roughly the max-PSI rating printed on the sidewall. If it is an all-season tire, I’ll go 3-5psi over that number.

Before you go out on that first run, grab a piece of chalk and mark the tread block as it goes over the shoulder. Do this on all four tires.

Now, go take that first run. When you come back, take a look at those chalk marks. The chalk tells us how far the tire “rolls over” during a run. If it is rolling over too far on to the shoulder, add more air pressure. If it isn’t rolling over far enough, bleed some air out.

How far should the tire roll over? Good question! That also depends entirely on the tire and the car. But a good starting point is to look for the little triangle that manufacturers mold into the sidewall to indicate where the tread plys of the tire stop. Keep adjusting air pressures until the chalk is being scrubbed-off even with the triangle.

At this point, you’re pretty darn close to finding the optimal tire pressures for this tire on your car. But don’t stop just yet. Going up or down a few pounds of pressure might still yield faster lap times. Keep chalking the sidewalls, and compare how the car feels with the times you set until you’ve nailed it.

The key is to do this with all four tires. Don’t worry yet about how the car is handling with regards to understeer or oversteer. The goal is to find the optimal pressures that give us the maximum traction on the front and rear tires…which often won’t be the same number on the gauge.

Air is a gas, and the density of most gasses is fairly dependent on temperature. That means that, as the temperature of air in our tires goes up, so does the pressure. When you’re tuning tire pressures, it is important to keep this in mind. Some people have different techniques, but I always record the pressure both before and after the run so that I can understand how the pressures might have changed over the course of the run. I also always target tire pressures for warm tires. This means that, for my first run on cold tires, I’ll start them a bit low. 2psi is usually a good rule-of-thumb.

But The Car Handles Horribly!

So, now we’ve found the sweet spot for our tires. At this point, we’re getting the maximum traction from both ends of the car. But that doesn’t mean that the car is a pleasure to drive. In fact, it is probably awful, because we’ve intentionally ignored the balance. But that topic is worth an entire post on its own, so we'll cover that next time!

When to Adjust In the last installment, we covered how to find the optimal air pressure settings for the…

Ah, the New Year! Queue the obligatory reflection on last year, along with the anticipation and promise of the…